In celebration of my birthday today, I’d like to share the story of our son’s birthday. It’s difficult for me to think back and reflect on those few days, but I think it’s also important from a healing perspective to talk about it.

While I may not like the circumstances of his arrival, this experience is mine and mine alone. I own it. I made what I believed to be the best possible decisions for the health of myself and him in each moment. So did the medical team providing our care. It wasn’t ideal, but everything happens for a reason and I just have to trust in that.

A lot of these details are taken from notes from our doula and my doctor’s file – as I clearly wasn’t writing things down when they were happening. 😉

After several false starts (and sleepless nights) and after an ultrasound showed low fluid levels for babe, hubs and I had a long and deep discussion about giving in and agreeing to medical induction. We had held off for 11 days after our due date, and given our early scans and tracking of dates, we knew for certain little one was ‘past due’ – even if we weren’t concerned about rushing the process.

So, on November 6, about 11pm we checked in to the hospital. I had been having contractions all day, but not enough to get labour going to the doctors’ liking.

We didn’t want to jump in right away with drugs, so opted for the least ‘invasive’ of interventions which was having the doctor break my water. That happened around 3am. That doctor was a butcher. I felt like an animal on the slaughter line. I think that pain was worse than the rest of my labour. I still don’t believe she did it right, because no fluid came out, and later the following day, my waters very clearly broke.

Throughout the process, I found it rather funny that the doctors and nurses all made such a big issue about my being overdue and having low amniotic fluid, yet it took forever for them to do anything. Also, for a hospital that prides itself (at least in propaganda) on respecting families’ decisions, I was made to feel like I was selfishly putting my baby in harm’s way when explaining every reluctance I had to interventions, even though I had educated myself ad nauseam about procedures and risks. I was, after all, nearly two weeks late. Had to fill that time waiting somehow!

But, I digress. During this time I tried bouncing on a birth ball, walking, and just about anything else to get baby moving, but we weren’t making progress.

With the morning shift change my OB came on shift and as gently as he could, knowing my opposition to it, insisted we start synthetic oxytocin.

With the oxytocin, mum and baby need to be under constant monitoring, since it can be too intense for some women and babies and cause complications including uterine rupture and fetal distress. My doctor had promised there would be mobile monitoring which was the only reason I agreed – knowing I still had freedom to move around to find comfort was a ‘selling point’ for me. When the nurse said there was a problem with the battery charge, I almost lost my shit. Thankfully, she sorted it out. 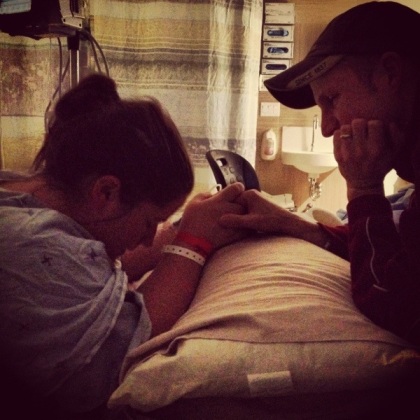 Around 3pm I could not handle it anymore. I was at my limit. Exhausted and in pain, and having not made much progress again with the oxytocin, and against all my hopes for the birth, I asked for an epidural.

Failure. Heartbreak. Again I cried so hard I was beside myself. I was so so tired and the relief was something incredible at that point.

Shortly after the epidural, my blood pressure dropped very low, and baby’s heart rate also dropped. I was put on oxygen for a while. This happened again several times throughout the night. Mostly every time a doctor or nurse tried to mess with baby in some way. Each time my heart went into my chest with panic because I didn’t know what was happening and none of the medical staff explained what was going on.

Finally, I was so tired and so sick, and I just felt in my heart of hearts and with all my intuition that this baby just was not going to cooperate and come out, that I asked the doctor for a c-section, rather than putting myself and the baby through more stress than necessary. I didn’t take the decision of asking for a c-section lightly. I knew it was major surgery and there were many risks involved. This was about 630pm and there had been another shift change, so it wasn’t my doctor. This doctor was reluctant, given that I was making progress – albeit incredibly slow and minimal.

I recalled a conversation I’d had with my doctor about labour and he said he wouldn’t feel comfortable with me (or any of his patients) labouring for more than 12 hours. Again, I felt it was funny they were so concerned about getting this baby out that my induction couldn’t wait a day, and here they’d been letting me labour for nearly 36 hours at this point.

The hours dragged on. Still, baby was not coming. Around 11pm I had a final check and while I was technically ‘ready’ physically, baby was turned facing my hip still, and so wouldn’t be able to come out. We waiting until 2am for a specialist to come to try and turn baby. No go. Our little one would not be moved from his comfy home of the last 9 months. At 3am the doctor came in and recommended a c-section for my ‘failure to progress’.

Failure. Heartbreak. Again. More tears. So many tears. I’m sure I could have filled an ocean with all the tears I cried. I felt so betrayed by both my body and the doctors. And stupid for believing I could do this.

We didn’t get in for the operation until nearly 5am – almost 12 hours after I’d requested surgery. The doctor tried again to turn baby one last time with no luck.

When we went in, doctors noticed that I was leaking meconium, an emergency, and so things went very fast from there. It meant we wouldn’t be able to do delayed cord clamping like we wanted, and there were two respiratory therapists on standby for baby when he came out.

I was shaking like a wreck at this point, and I swear my pain medication was wearing off, because when I told the anesthesiologist what I was feeling and where, he gave me a big old shot of something. So much for our drug-free birth.

Throughout the surgery, none of the doctors explained what was happening. I was terrified. I feared my baby or I was going to die.

“Just 5 more minutes and your baby will be out,” the anesthesiologist assured me. But as I watched the clock, I sensed something was wrong. The doctors couldn’t seem to get baby out, after much longer than 5 minutes. It took a final shove from down below to get him up and out.

I waited. Waited to hear a cry that would tell us our son (it’s a boy! And I was right, hubs!) was OK. Nothing. It took 2 minutes for him to cry, but when he did…. I will never forget that sound. Such relief. Finally, things were over.

I found out after that I hemorrhaged during the surgery, and my uterus tore when they were getting baby out. This was likely why the doctors were doing some freaky chanting counting at one point.

Through this entire experience our amazing doula and my incredible husband were my rocks. Supportive, encouraging and more than I could have asked for. I couldn’t have done it without them and I am eternally grateful for their love and support during such a difficult process.

One thought on “Welcoming baby”